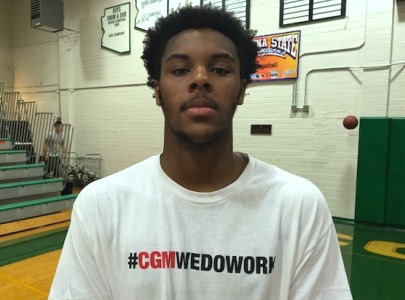 Another new addition to Arizona's strong 2020 class of prospects is CGM Prep Academy 6-foot-5, 200-pound sophomore guard Seth Dawson.  Dawson played last season at Inderkum High School in Sacramento, CA.  Since moving to the state of Arizona and attending CGM Prep, Dawson has reclassified to the 2020 class - making him very physically mature in comparison to other 2020 prospects in the state.

Dawson will lead the program's National high school team this high school season from the point guard position on the floor.  A very big point guard prospect, at any grade level, Dawson is a pass-first point guard that sees the floor and enjoys making the right pass to an open teammate - a very nice quality for a point guard prospect.  His size allows him to post up smaller defenders and opposing guards.  This is a glaring advantage that he will have, and it will be very interesting to see how much he utilizes such an advantage throughout the season, and in his continued development as a player.

As a 2020 prospect, Dawson will have an opportunity to become a very highly sought after recruiting target.  While he was already regarded as a very good prospect in the 2019 class, as a member of the 2020 class, he becomes special.  A very big guard with a nice overall feel for the game - capable of running a team and scoring from inside and out.

I look for many college programs to begin pursuing Dawson as a college prospect, and expect him to begin receiving numerous offers from the mid to high-major level.

I will continue to follow the play and recruiting progress of Dawson closely this high school season, and bring you any updates as they continue to develop.

Arizona Hoop Review Scouting Report:  Dawson is a very big  guard prospect, especially from the point guard position where he will be playing the position full-time this season for CGM Prep.  He has superb size for the position, standing 6-5 in height and weighing over 200 pounds.  A left hander, Dawson has a solid shooting stroke, but needs to become more consistent from longer ranges.  He has a very good handle of the basketball and sees the floor very well - possessing a good basketball IQ.  Pushes the basketball up the floor.  A good floor general.  A good finisher in the open floor, and a strong finisher to the basket.  A grown man physically for a 2020 prospect, and very intriguing as a college prospect.  I will be keeping a close eye on his play this season, because he is so intriguing as a prospect.  Has the potential to become a highly sought after recruiting target now in the 2020 class.