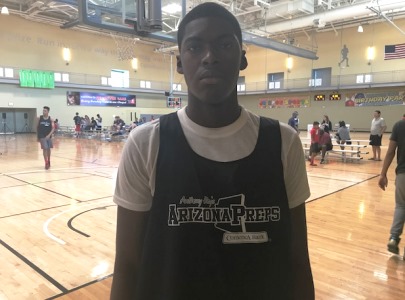 One of the top up-and-coming prospects in Arizona's talented 2019 class is AZ Compass Prep 6-foot-7, 235-pound rising junior forward prospect Takari Fields.  A native of Chicago, Illinois, Fields moved to the state several years ago with his mother, and now is looking to develop into a serious college prospect.

This summer, Fields decided to transfer schools - leaving Chandler High School and landing at AZ Compass Prep, where he will now finish his last two seasons of high school.  Fields made his decision as a result of his academic situation.  While at Chandler HS, Fields was struggling a great deal in the classroom.  He and his mother decided to make the move to focus on academics, and to improve his performance on and off the basketball court, especially in the classroom - giving himself a chance at a future in college.

Fields is currently working hard on and off the floor, and has improved his academic performance already through taking summer school courses, while improving his play on the court through a strong conditioning program instituted by head coach and former NBA player Ray Weathers and his dedicated staff.

Fields' progress as a player was eminent in this year's Southwest All-American Camp, where he played very well in the event, and was selected as a Top 40 All-Star recipient in the event - playing very well in the all-star game and proving his hard work.  Fields has shown a much improved ability to run the floor and also finish strong around the basket.

Fields is a prototypical power-forward prospect that enjoys playing with his back to the basket and does not mind physical contact.  He is an active rebounder that keeps the basketball up high for finishes and offensive put-backs, and his left-handed shooting prowess is developing, which allows him to finish plays in traffic and also stretch out to 18 feet and keep defenses honest on the floor.  As he gains more consistency on his outside shooting stroke, and becomes more explosive off the ground, he will see his game progress a great deal.

Fields does not currently possess any serious recruiting interest, although over the next year I expect him to develop into one of the better post prospects in the class in Arizona.  With the improved level of competition he will face daily at AZ Compass Prep, Fields should develop at a nice pace for the future.

I will continue to follow Fields' continued development as a player, and bring you any updates on his college recruitment as it begins to develop this up-and-coming high school basketball season.