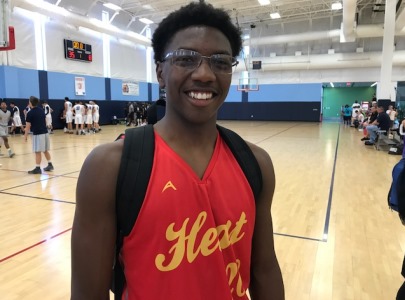 One of the top overall prospects in Arizona's loaded 2019 Class of prospects is NFL Yet 6-foot-4 rising junior wing Shekeedren Bryant.  Coming off an excellent showing last season for himself, and leading his team to a 1A State Championship, Bryant is one of the better overall prospects in the state that many have not heard about.

This past high school season, Bryant was terrific, as he helped lead his team to a tremendous 30-2 overall record on the season.  For his efforts last season, Bryant averaged 13.9 points, 7 rebounds and 2.8 steals per/game.

Bryant is a tremendous young talent that many basketball enthusiasts in the state have not seen perform.  As a result, most college coaches have not seen him play either.  He is a definite division-I prospect, that could play at the mid-major division-I level with natural maturity and continued hard work on his craft and skillset.  His natural physical athleticism is glaring and he has a nice skillset already that suggest that he should only continue to improve over the next two seasons.  Playing against better competition will aid him in his pursuit immensely as a player.

Bryant possesses a nice, athletic frame that allows him to finish plays at a high level in the open floor, while also slashing to the basket and finishing plays strong at the rim over defenders.  He is a versatile and strong wing prospect that handles the ball and makes plays off the dribble for himself and others.  A good creator with the ball in his hands, Bryant is also a good mid-range shooter that still needs to add more consistency to his shot from longer ranges.  As he develops a better shooting stroke, he will see his complete game maximized to another level.

Bryant is an active rebounder and also a good defender that plays with good intensity on the floor. He is capable of becoming a lock-down defender over time, which would suit him nicely over time.  He has a good overall motor, but an even better motor would be tremendous for his college recruitment.

While being a definite and serious sleeper prospect for college programs, Bryant has a bright future ahead of him, and has the potential to become a mid-major prospect that will make a difference at the next level for a program.

Next high school season, Bryant and his NFL Yet team will be moving up the ranks in the AIA, and will be playing against bigger school programs.

I will be keeping a close eye on this young man as he continues to develop as a player over time.