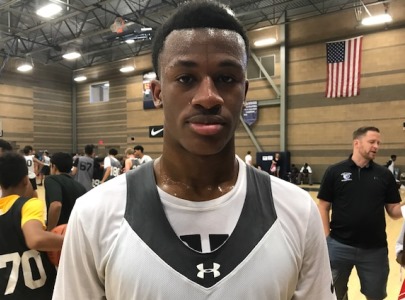 Shadow Mountain High School is absolutely loaded again this high school season, after winning the 4A state championship last season, and going undefeated throughout their regular season.  Shadow would eventually fall to top-ranked Montverde (FL) in their final game of the season in the Dick's Sporting Goods National Tournament - finishing with a 27-1 overall record on the season.

Shadow Mountain has been the class for basketball in the state of Arizona for numerous years now, literally dominating the state's basketball competition.  After winning consecutive state titles, the Matadors are back for the 2017-2018 high school season bigger and better, as a result of some key additions to their roster for the new season.  The biggest new addition is Memphis transfer, 6-foot-6 junior combo-forward Bruce Guy.

Guy is a recent transfer to Shadow Mountain from Memphis, TN.  He recently had a strong coming-out-party at Ryan Silver's West Coast Elite Showcase event in Arizona.  In the event, Guy displayed an ability to score inside and out.  A left hander, Guy has a college-ready body already.  He is an excellent addition to the state's already loaded 2019 class, and a very nice addition to this year's Shadow Mountain team.

I caught up with Guy recently and he advised me that his current college recruitment is going very well for himself.  Guy indicated that he currently has offers already from such schools as Cincinnati, Providence, UAB, New Mexico, Oakland and Murray State - a nice set of schools already this early in the recruiting process.

Guy did not indicate any leaders at this juncture in his college recruitment, and that he was hopeful to reel in more offers throughout the recruiting process, especially after now moving to the state of Arizona, where he will look much more like a bigger fish in a smaller high school pond of talent.

Guy will team up this high school season with high-level junior talents Jaelen House and Jovan Blacksher.  These two young men have been almost unguardable for opposing guards in Arizona and play with a superb level of confidence.  Teaming up with Guy now will be almost unfair this high school season.  Guy and other key additions to this year's team, 6-foot-3 junior guard Jalen Williams and 6-foot-4 gifted sophomore Shamar Morrow do make it unfair.

Shadow Mountain will look to compete for a national championship this high school season, not just a state championship.

I will continue to follow the college recruitment of Bruce Guy closely, and also follow the success of the Shadow Mountain team this high school season.

Arizona Hoop Review Scouting Report:  Guy is a recent transfer to Shadow Mountain from Memphis, TN.  He has an ability to score inside and out and is a versatile prospect.  A left hander, Guy has a college-ready body already.  While he is considered as a small forward (3), he is very strong and also gets a lot done inside the paint, while possessing excellent footwork and body control.  He is a very good finisher that runs the floor very well.  He has a soft touch out to three-point distance, and can score from anywhere on the floor.  An active rebounder that is committed to getting offensive put-backs.  A very good shotblocker for his size. An excellent addition to the state's already loaded 2019 class.