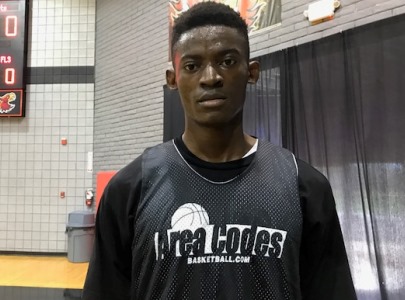 With the recent loss of players from the state of Arizona to other state's to pick up their basketball careers, as I said more players were coming through the prep school ranks.  This addition of players at local prep schools will take the state to another level.  Introducing Bella Vista Prep 7-foot-1, 220-pound junior post prospect Rick Issanza.

With the recent graduation of Hillcrest Prep superstar 7-foot DeAndre Ayton to the University of Arizona, now Issanza takes over where Ayton left off - another huge post talent that runs the floor, has excellent athleticism, finishes strong at the rim and is capable of making perimeter shots.  Another unique basketball prospect inherited by the state through the prep school ranks.

Issanza will only be a mere junior as well, which will allow college coaches to see him throughout the year, in an attempt to recruit him.  Issanza should become an elite national prospect immediately, and should see the highest level of recruitment.  Academics will be the key for this tremendous talent, as he is a native of Africa and has traveled a lot already in his young career.  There will be some work to do academically I am sure.

Bella Vista Prep looks to be absolutely loaded this season, as former Hillcrest Prep Academy head coach Kyle Weaver has taken over the school and the head coaching position.  Kyle and his brother Nick Weaver developed Hillcrest Prep Academy into one of the nation's elite basketball programs in the country over the last two years.  The two brothers recently parted ways, and now Kyle is looking to build the Bella Vista High School basketball program.  Weaver has brought in close to 20 new players to the program already for this up-and-coming season.

And Issanza is one of them.  Another sure-fire star level talent that will benefit the state a great deal through attracting high-level college basketball coaches to the state of Arizona.

Issanza is a rare find - a long and strong basketball post prospect that runs the floor and has a variety of offensive skills.  He has unique size and agility, which allows him to make plays around the basket with a soft touch and with advanced footwork.  He blocks or changes almost every shot in his area, and is also able to extend and alter shots outside of his area when he decides to.  Issanza runs the floor extremely well, and is an excellent finisher in transition, where he gets to the rim and finishes above it.  He is a good low-post scorer that times his time in the post to make shot attempts, and also finds the open man on the floor when double-teamed.  Also an active rebounder that rebounds outside of his area.  A sure-fire pro prospect for the future, and if he continues to work hard, the sky is the limit for him.

I look forward to watching this young man perform and develop this high school season, and will bring you any recruiting updates as they begin to develop at the Bella Vista program.