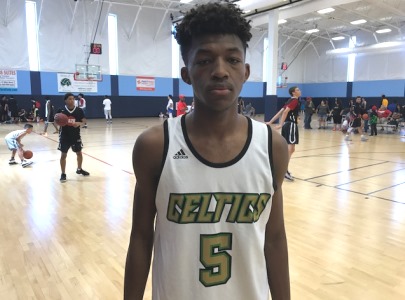 One of the top overall prospects in Arizona's 2019 class of players is Skyline High School's 6-foot-3 rising junior guard J'Saan Strover.  Strover was among the top scorers of the basketball last season for the class, after having a breakout sophomore season for himself.  Here is my take on one of the state's more atheltic guard prospects.

Strover is coming off a big sophomore season for himself, which declared to Arizona basketball enthusiasts that he is a real player in any discussions about the state's top 2019 prospects.  While the Skyline team would finish with a 13-13 overall record on the season, Strover was a major factor for the team every night - averaging big numbers on the season for his team.

Strover was amnong the state's top individual producers last season, and he still has two full years of high school basketball rem,ainning on his resume.  Strover averaged 16.4 points, 6.8 rebounds, 4.4 assists and 1.9 steals per/game on the season.

Strover had a very good showing for himself this spring on the U16 club circuit, while traveling with his program, the I-10 Celtics.  Strover performed very well in helping lead his team to a final four finish in the Rumble in the Bronx tournament recently in New York.

Strover is a very talented guard prospect with good length and a knack for driving to the basket and finishing strong at the rim.  He has excellent body control and is able to slash and finish in traffic, even over bigger defenders if need be.  He is excellent in transition and a strong driver of the basketball.  He has a good handle of the basketball and keeps his head up, allowing him to make plays for himself and open teammates on the floor.  Strover also applies pressure on opposing defenses consistently, and is a creator wit hthe ball in his hands.

Strover is an OK shooter of the basketball, at his best from mid-range - able to stop and pop off the dribble and keep defenses honest.  He does need to seriously improve his perimerter shooting stroke from longer ranges.  Currently he is not much of a threat from longer ranges, so he will need to put some time in the gym to maximize his potential as a player.

His best attribute is on the defensive end of the floor, where he is a potential defensive stopper.  His length of body and quick hands and feet allow him to play passing lanes consistently, and he is a threat to steal the basketball and get deflections consistently throughout the game - his best attribute as a player currently.

This young man has good toughness as a player and plays with a no-nonsense attitude on the floor.  He has the potential to become a serious division-I player over time, he is already a solid division-I prospect.

I will continue to follow the progress of Strover as a college prospect over the next two years, but he is off to an excellent start in his high school career.