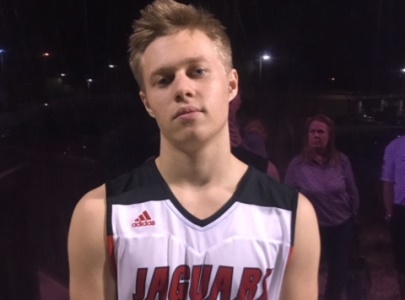 One player to watch this high school season, and over the next two years is Boulder Creek High School's 5-foot-10, 170-pound junior guard Jordan Clark.  Clark is a tough, hard-nosed guard prospect with excellent physical toughness and a competitive spirit that allows him to make plays at a high level for himself and his team, even though he gives up some size.  A big-time producer on the floor, Clark is coming off a strong showing for himself this past spring and summer, and now will look to capitalize off his recent success this high school season.

We first wrote about Clark as an eighth grader, after he poured in an amazing school record 46 points for his program, Gavilan Peak Middle School.  Since then, Clark has continued to develop as a player.  Clark would look to have a big spring and summer for himself, while traveling with a team of top performers for a club team for Inspire Courts known as AZ Finest.  Clark would have a strong showing for himself on the club circuit, while having numerous 30-point performances on the national club circuit.

This high school season as a junior, Clark will look to make an impact at Boulder Creek HS, and pick up where he left off this spring and summer - utilizing the tremendous experience that he has gained from playing with strong competition throughout his young career.

Clark is a smaller, compact guard prospect with a strong frame and a willingness to mix it up with bigger guards and players in the lane.  He is a strong driver of the basketball and is a very good finisher in the lane that uses a very crafty approach to the game to make plays.  Clark uses a variety of floaters around the basket and puts the ball high up on the glass to avoid being blocked.  He has a soft touch around the paint and is fearless while in motion to the basket.

He is also a very good shooter with a nice left-handed shooting stroke and a quick release on his shot.  He also has excellent range that allows him to stop on a dime and make shots from almost anywhere on the floor.  Clark plays much bigger than his size suggests, and he is a strong finisher in the lane and can score with either hand around the basket.

He is also a very good ball handler and passer that sees the floor.  Clark pushes the basketball up the floor to the open man, and looks to make players around him better - a nice quality for a point guard.  While Clark is smaller in size, he is capable of playing both guard positions on the floor, as a result of his ability to score the basketball and also be a floor general.  He has excellent toughness as a player, which also allows him to be a very good defender as well, that will give up his body for the sake of his team's success.

Clark will look to make a splash this high school season for a Boulder Creek team that will look to compete in the state's competitive 6A Division.  Clark has been sidelined with a hand injury early this season, but in his first opportunity back on the floor, he poured in 19 points quickly (in 8 minutes) in limited action in his team's narrow loss to Horizon HS this season.  Clark's 19 points brought the team back from a 20-point deficit, narrowing the lead down to 6 points, before the team would eventually fall 93-84.

Boulder Creek is off to a 2-5 start on the season, and will travel to Corona Del Sol HS on Tuesday in a big match-up for their program.