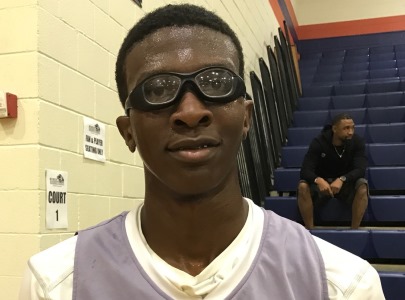 One of the top overall prospects in Arizona's 2019 class that emerged this spring is Deer Valley High School's 6-foot-7 rising junior post Brandon Savage.  Still a developing post prospect, Savage turned in a very good spring performance for himself and now is rated by our staff as one of the better rising prospects in a very loaded 2019 class of players.

I came away very impressed with this young man's potential as a college prospect after observing him in several events this spring, and came away intrigued by his potential for the future.  Savage's high motor and ability to defend the post, block/change shots and rebound outside of his area are glaring attributes that make him an attractive prospect for the future.  Still growing a great deal, Savage should grow to 6-8 and even 6-9 in height, and, if he does, that would considerably change his potential for the future - making him a much more attractive post prospect.

Savage played this spring with a very talented 16U group for his club program, The Classics.  The team is absolutely loaded with top-rated talent from Arizona's 2019 class, and was tough to beat all spring.  The Classics had an excellent showing throughout the spring, and was able to bring home a 16U tournament championship at Ryan Silver's West Coast Elite Spring Classic event in Las Vegas during the NCAA Evaluation Period.  Savage was a nice contributor for the group and proved that he can compete against the best talent in the West in the process.

Savage is an active post prospect that competes on both ends of the floor hard and runs the floor very well.  Still a little raw offensively, Savage has developed a great deal over the last year and is improving a great deal – suggesting that he will only continue to improve much more, as a result of his tremendous upside.  Savage is capable of playing both post positions but is at his best as a stretch four-man.  He has a very good jump hook and solid low post moves now with good overall footwork.  He is also able to step outside and shoot the basketball with good confidence.

Savage is also a very good shotblocker and a very active rebounder that plays with good intensity.  He has a nice overall level of skill and talent that should really develop over time, especially under the strong coaching he is receiving with the Classics, and will receive at Deer Valley HS under experienced and dedicated head coach Jed Dunn.

Savage will team up next high school season with a very loaded group of talented players at Deer Valley.  Such players as 6-foot-6 senior Bryce Davis and twin brothers Jaret and Jalen Allen will combine with Savage to give Deer Valley one of the best lineups in the state next season, and my favorite to compete with Sunnyslope next season in the 5A Division.

Savage has a bright future ahead of him.  Look for this young man to begin to garner serious recruiting attention over time.  He should develop into one of the more sought after post recruiting targets next spring (2018).

I will continue to follow his progress as a player over the next year, and look forward to watching this young man develop as a player and a young man - on and off the court.