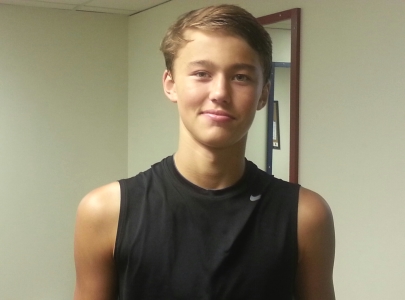 Patrick Kelly comes from a totally different brand of basketball - moving from the state of North Carolina just a year ago.  As a result, Kelly brought with him to the state of Arizona a developed understanding of the importance of the game of basketball.  While this young man is still very young and developing a great deal physically, Patrick Kelly is another young prospect to keep an eye on for the future.

A rising freshman that will attend Pinnacle High School this fall, Kelly has come a long way in a short period of time.  Still only 14 years of age, Kelly has grown a full four inches in the last year - showing that he has a lot of room for growth still.  His current growth spurt and pattern suggest he should grow to atleast 6-8 in height in the future, so this young man has some very good potential for the future.

Kelly has spent the last year developing as a player and looking to capitalize on his hard work, on and off the court.  After moving to Arizona a year ago, Kelly would suffer a broken bone in his foot several months ago - causing him to rehab the injury.  Kelly has worked very hard while working with a personal trainer at Scottsdale's AMP Sports Performance.  Kelly has worked on his lateral quickness, overall speed and agility during workouts daily at the facility, and looks to have become much stronger physically as a result of his efforts.

"It has really helped me," said Kelly.  "I feel like I will be much stronger now when I begin playing again."  Kelly went on to say, "With basketball being taken away from me for awhile, it has really made me appreciate it.  I don't take anything for granted.  I have really missed it."

Kelly will be cleared to begin playing again very soon, and when he is cleared this young man will look to build on his development.  Kelly should see his time primarily at the small forward and power forward positions over time.  As he continues to mature physically, he will become much stronger, quicker and more athletic.  His best best attribute right now is his tremendous work ethic and love and passion for the game of basketball.  Kelly's desire to be a player is tremendous and will carry him to becoming a nice prospect in the future, especially since he is nowhere near what he will become over time.

Kelly is the son of former NFL player Pat Kelly, who was a 6-foot-8 tight end for the Denver Broncos.  His father passed away when Kelly was young, so this young man has had to overcome tremendous adversity as a youngster.  Playing the sport of basketball will be simple to Kelly after you consider what he has already been through.

"Kids here (Arizona) play basketball and act as if there is always another game to play," said Kelly.  "In North Carolina there were no other games.  Everyone plays basketball - you play to win."