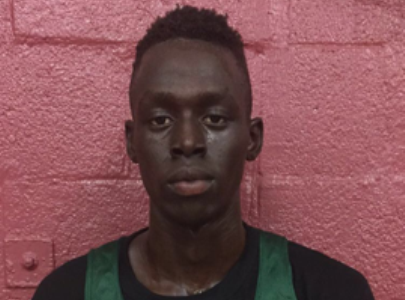 While many prospects in Arizona's 2018 class are looking to make a name for themselves this spring and summer, one of the lesser known prospects in the class but definitely a nice sleeper prospect is Peoria High School's active and hard-working 6-foot-5 rising senior forward Lahad Adeim.  A native of Africa, Adeim is a high-energy forward prospect with very good potential for the future.

Since Adeim competes in the West Valley and because his team did not reach the state playoffs last season (10-11 overall record), many basketball enthusiasts in the state have not seen this young man compete.  I caught my first glimpse of Adeim in last year's exposure event organized by Ryan Silver, and then was impressed by him again in our Arizona Preps Fall Showcase (2016).  Adeim was one of the top overall performers in both events.

What stands out about Adeim is his nice work ethic, and high-energy motor that he plays with on both ends of the floor.  He competes at a high level and looks to make plays for his team, even when plays are not developing.  Adeim creates opportunities on both ends of the court, as a result of his tenacity.  He plays passing lanes and creates steals and deflections that lead to offensive scoring opportunities for his team.  He also rebounds outside of his area, which makes him very valuable for his team.

Offensively, Adeim is still a work in progress.  He has a solid left-handed shooting stroke and is a solid mid-range shooter.  He does not take many shots beyond the arc, but rather gets scoring opportunities primarily while slashing to the basket and in the open floor.  He is also a good scorer in the post, and plays much more like a stretch-four man at this point in his young career.  He will need to develop into much more of a small forward over time to maximize his recruitment potential with college programs.

Adeim is a very good finisher and has a long, rangy frame which allows him to make plays at the rim.  He plays above the rim, so as he adds more physical girth to his thin frame, he should see his ability to finish develop.  While Adeim needs to develop his offensive skills overall to make himself a complete player, his activity on the floor is so glaring that he can help any team that he competes for and is an asset to his team.

Adeim had good numbers in his junior season, averaging 10 points and 4.3 rebounds per/game.  His senior season will be big for him, and I expect him to have a big breakout season as a senior.  Under the strong, high-intensity leadership of head coach Will Roberts, Adeim is at his best and will be a huge factor next season in Peoria High School's return to the state playoffs.  Adeim will team up next season with 6-foot-7 junior post John Price to give the Panthers one of the best frontcourts in the state.

Adeim will play this summer with Team Emphasis, which has produced numerous sleeper prospects over the years.  Adeim is a nice sleeper prospect in the class, and I will continue to follow his progress and development as a player this summer and next high school season.