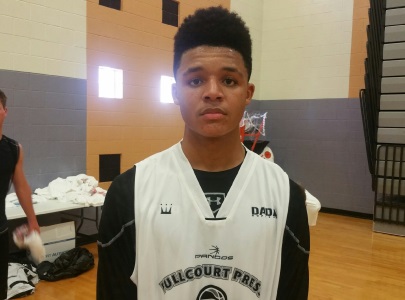 One of the better overall prospects in Arizona's 2018 class is Centennial High School's 6-foot-3 rising senior guard Koby Jones.  One of the most athletically gifted wing prospects in the state, regardless of class, Jones is a good sleeper prospect for a smaller  college program.  Here is my take on Jones and why I love his potential for the future.

Playing in the West Valley for a team that struggled to win games last season (8-17 overall record last season), Jones went almost unnoticed during the high school season, but has flourished in exposure events that I have observed him in, and also played well this spring on the AAU/club circuit.

Jones did very well for himself this spring while playing for his club program, Powerhouse Hoops Black.  Jones was a good contributor this spring - helping lead his team to a tournament championship at this year's Baylor All-Star Classic in Chicago, Illinois - defeating the historic Mac Irvin Fire in the event's championship game.

Jones is a very bouncy and athletic wing prospect that excels in the open floor, and is able to finish strong at the rim in transition and while slashing to the basket.  He plays much bigger than his size suggests as a result of his bounce off the floor and ability to make plays in the air.  Currently, Jones sees his time often on the wing, but he will need to develop as a shooting guard for the collegiate level.  Jones has an underrated shooting stroke with range on his shot, and is able to make shots from the perimeter, but he is at his best off the dribble when slashing to the basket, and from mid-range.

Jones has nice length on his athletic frame, which allows him to make plays well above the rim in transition.  He is a good overall scorer.  He is a solid ball handler and passer.  He is an active rebounder and defender that plays passing lanes.  Jones has good overall potential for the future - making him a very good sleeper prospect over time.

Jones is a very nice prospect for a smaller college program, where playing as a 6-3 shooting guard will not impact him.  His unique ability to play above the rim and play passing lanes makes him a very intriguing prospect.