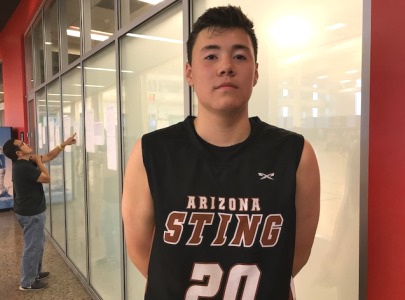 One of the better sleeper prospects in Arizona's 2018 class is Tri-City Christian Academy 6-foot-8 rising senior post Isaiah Alonzo.  While Alonzo plays in the CAA Conference for one of the state's elite charter school programs, many Arizona basketball enthusiasts have not seen this young man perform, but he is a good looking prospect with a nice offensive skillset.

Alonzo has not been relied on heavily by head coach Paul Brown over the past two seasons to score much or put up big overall numbers, but next season as a senior he will be expected to do much more for his team, as a result of the absence of Nigel Shadd (Kansas State signee).

Last season, Alonzo averaged 9 points, 5.1 rebounds and 3.3 assists per/game for a team that finished with an impressive 21-2 overall record on the season, and a runner-up state championship finish in the Division-III ranks for the CAA.

Alonzo is a rare find in the state, as he possesses excellent size and an ability to shoot the basketball very well from the perimeter with unlimited range on his shot.  Alonzo enjoys playing much more on the perimeter at this point in his young career, but has the size to become a serious post player, that can score inside and out.  He will just need to focus more on the process of developing into a complete player, but he has the potential to do so.  Tri-City will need him to become a much better scorer in the post next season, and the development as a player would help him a great deal in his college recruitment.

Alonzo has what it takes to also become a much better rebounder and finisher around the paint.  He runs the floor well for his size, but will need to improve his explosion off the ground and overall athleticism  to reach his full potential as a player.

I expect Alonzo to post much bigger numbers in his final season for the talented and dedicated Tri-City Christian coaching staff next season.  This young man, with continued hard work, is a good sleeper prospect for a smaller college program looking for size and a nice skillset.

I will continue follow the progress and development of Alonzo throughout the next year, and believe this young man will make a college program proud over time.