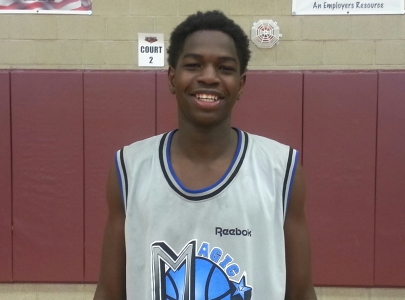 Mountain Ridge High School's basketball program is on the rise in a nice way, and a major reason for the emergence of the program as of late is the play of 6-foot-5 junior wing prospect Saikou Gueye.  Gueye is a talented prospect that has emerged in Arizona's 2017 class.

Gueye is a sure-fire talent that is among the top overall prospects in Arizona's 2017 class, but he missed the NCAA summer evaluation period after suffering an injury this spring.  As a result, Gueye missed the entire summer while recovering from the injury.  In the spring before the injury, Gueye helped lead his Arizona Magic 16U ballclub to two 16U tournament titles at two different Pangos events.

Gueye is a long, athletic and versatile wing prospect with very good promise for the future.  He has very good versatility as a player and his ability to score inside and outside is a nice attribute to have.  A left hander, Gueye is difficult to defend for many opposing wings in the state.  He is able to make shots from the perimeter out to three-point distance, while also being able to take defenders off the dribble and make plays at the rim and around the paint.  Gueye also is able to play much bigger than his size suggests, as he uses his length to play effectively around the paint, and also score in transition.

Gueye's most intriguing attribute is his ability to defend, which makes him very valuable as a player.  His same length allows him to play passing lanes and also block/change shots for opposing players.  Gueye is able to defend wings and also opposing low post players in high school.  At the collegiate level, he will be asked to defend small forwards, wings and off-guards, so he will need to continue to develop his footspeed to stay with atheltic wings as he matures physically over the next two years.

It is unfortunate for Gueye that he suffered a summer ending injury, as he would have had an opportunity to gain maximum exposure to college coaches.  He has already had numerous college coaches  show him serious interest as a college prospect, and next spring and summer (2016) will be very important in the college recruiting process for him, as he should hear from numerous mid-major college programs.

This high school season will be a very different one for Gueye and his Mountain Ridge teammates.  Mountain Ridge was once one of the top basketball programs in the state, and competed for state playoff berths and state titles each season.  After having several subpar seasons as of late, and also coming off a 7-14 overall record during the 2014-2015 season, Mountain Ridge will look to turn things around in a major way next high school season.  The addition of 6-foot-5 senior Jay Green, joining forces with Gueye and also talented 6-foot-6 junior wing Jared Rodriguez and incoming freshman stud wing Josh Green, will give Mountain Ridge one of the most talented lineups in the state next season.  All four prospects are division-I prospects for the future and each very gifted - a major boost for head coach Eli Lopez.  Lopez will have his best group of high school talent ever next season, and it also could be the most talent the school has ever seen.