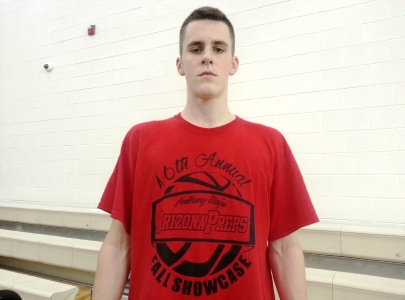 One of the top post prospects for Arizona's 2017 class is a lesser known performer from Flagstaff, Arizona.  Flagstaff High School's 6-foot-6 junior forward George Faull is coming off a breakout sophomore season for himself, while helping lead his Flagstaff team to a very successful season last year.

I have written several times about Faull previously, as he has caught my attention each time I have watched him perform.  I first discovered Faull at our Arizona Preps Fall Showcase in 2014.  I appreciate his toughness as a player and ability to rebound the basketball.  He has excellent intangibles as a player, as he does the dirty work for any team he competes for - a lost art in today's game of basketball where everyone wants to score.

Faull is one of the better 2017 prospects in the state and definitely at his position.  He is a strong low post player that rebounds the basketball and finishes strong in the paint, often getting to the free throw line as a result.  Faull has a strong physical frame and good lower body strength, which he uses to overpower many low-post defenders in Arizona.  At the next level, and against better low-post talent, Faull will need to develop his low post skills offensively, but he still has two more years of high school to develop as a low post scorer for the next level.

While he is not much of a scorer, he is a good passer out of the post and moves without the basketball.  A great glue-guy for his team, Faull has very good value as a college prospect.  The level of college prospect that Faull becomes and develops into will be determined by how much he develops as a low post scorer inside the paint, and just how consistent he proves that he can make shots from the perimeter.  I really like where he is headed though, and I see Faull as developing into a solid power forward for the next level.  It will be interesting to see where he lands collegiately, so this high school season and next spring and summer (2016) will be tremendous in his college recruitment.

Flagstaff HS finished 23-5 last season, and will look to have an even better season this year (2015-2016) after they fell by a mere 3 points to Gilbert Christian HS last season late in the Division-II state playoffs.  If 6-foot-7 senior post Brett Morrow can recover from an injury that caused him to miss the spring and summer this off-season, then look for Faull and Morrow to make up one of the best frontcourt tandems in the state this high school season.

Faull is a throw-back performer and one prospect to keep an eye on for the 2015-2016 season.