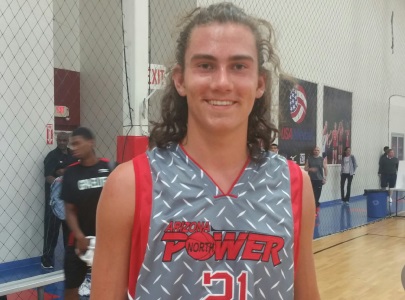 One of the better sleeper prospects that I witnessed this spring during the NCAA Evaluation Period was Chaparral High School's very talented 6-foot-7, 205-pound junior forward Kai Fletcher.  Fletcher impressed me with his play this spring, and has quickly become oneof the better 2017 prospects in the class.

Chaparral High School is coming off a disappointing season in 2015-2016, but is absolutely loaded with talent for next season.  In fact, Chaparral is one of my favorites next season to compete for the Division-I state title - becoming one of the most improved teams in the state.  There are numerous players next season that I look for to step up for this high school program, and Kai Fletcher will be a big reason for the team's resurgence next season.

Fletcher is a very gifted 3/4 prospect that has the skills and ability to make a big splash next season, but this club season Fletcher is already making some noise for himself on the AAU/club circuit.  I watched Fletcher perform this spring while playing for his club program, Arizona Power North.  Fletcher impressed me a great deal with his versatility and ability to make plays on the basketball court on both ends of the floor.

Fletcher is a skilled post talent that looks his best as a 4-man, but is also able to score the basketball from the wing position on the court.  He has a nice perimeter shooting stroke with a soft touch, and also has advanced footwork in the low post, allowing him to score on the low block and create mis-match problems for opposing post players, as he has good quickness in the low block.  He gets to the free-throw line quite often as a result.

Fletcher is an active rebounder on both ends of the floor, and rebounds outside of his area - allowing him to start the fast break while pushing the basketball up the floor to the guard.  Fletcher is a good passer out of the post and does a good job of finding the open man on the floor.  An unselfish player, Fletcher is a good teammate and plays hard with good work ethic.  He is also a good low post defender, and is capable of defending 3's or 4's - depending on who he is guarding.  He is best guarding opposing post players, but has the quickness to defend smaller players on the perimeter.

Fletcher is a very nice sleeper prospect that is worthy of serious college attention from smaller programs.  While there are so many different Arizona club teams currently, it will be important for Fletcher to continue his strong play, and come up big at the right time when college coaches catch a glimpse of him.  He is an excellent prospect for a division-II program and has the ability to play for a smaller division-I program looking for low-post scoring and good versatility.

I will continue to follow Fletcher closely this summer, and look forward to watching this young man perform and develop more this club season.  He is definitely one of the better prospects now in the 2017 class, and a good sleeper prospect worthy of recruiting attention.