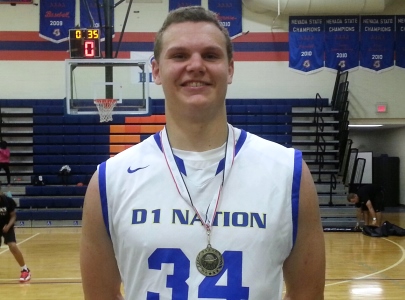 Arizona's 2017 class is loaded with talent and while college coaches will be primarily focusing this spring on much of what the 2016 class has to offer, many college programs will also be trying to get a jump on the 2017 class as well.  One prospect that has emerged a great deal this spring and now looks to be one of the best prospects in the class is Brophy Prep High School's 6-foot-9 rising junior post Sean Dunn.

Dunn is a rare find in the state of Arizona - a larger post prospect with excellent size and skill level.  Dunn is massive physically and he also runs the floor like that of a prospect much smaller.  An excellent looking prospect for the future, that I fully believe will develop into a high-major division-I prospect.  He has very good hands and feet for his size, runs the floor well and is a good finisher around the basket with a soft touch.  Dunn has good low-post footwork.  He is a strong rebounder that gets excellent inside post position at all times, and is difficult to keep off the glass.  He is also a capable shotblocker with good timing.

Since there are always few larger post prospects in the state, and not many in the West that are skilled and big, I look for Dunn to really make some noise with bigger college programs - once they catch a glimpse of him.  This young man was one of my favorite surprise performers of the spring and I believe that he has a very bright future ahead of him.

Dunn will anchor a talented Brophy Prep lineup next season that will be in a transition, as former head coach Tony Fuller was relieved of his head coaching duties at the end of the season.  First though, look for Dunn to continue to make some noise for him and his club program this summer on the club circuit.