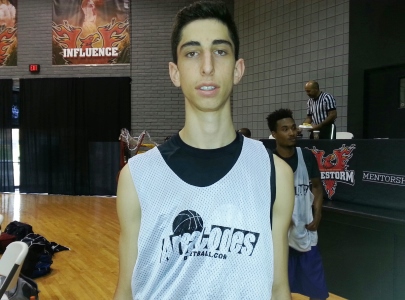 One of the top prospects that I have seen is Mountain Ridge High School's 6-foot-6, 165-pound rising junior wing Jared Rodriguez. While Rodriguez has yet to put up any serious numbers as of yet, like many other prospects in the class, this young man is gifted and has excellent potential over time.

Mountain Ridge HS struggled last season to win ball games - finishing with a 7-14 overall record on the season.  The team was relatively very young, with only four total seniors on the team last season.  This season (2015-2016) should be a lot different for Rodriguez and Mountain Ridge, as Rodriguez will be a year older and so will many of the team's top returning players, including talented 6-foot-5 rising junior Saikou Gueye.  Also, the addition next season of 6-foot-5 senior Jay Green will also be very promising to the team.  Mountain Ridge could be the state's most improved team next season.

To see a major improvement in their overall play next season, the Mountain Lions will need to see serious maturity as a player from Rodriguez, who should have a breakout season as a junior.  I expect Rodriguez to mature physically by next season and begin to make shots from the perimeter, while being able to score the basketball inside the paint, as a result of his nice length and athleticism.  He will need to rely on both of these two attributes that he possesses to maximize his potential as a player.  Rodriguez definitely looks the part of a serious prospect, it is now time for him to produce on the floor and take strides into becoming a producer on the floor.

Rodriguez has excellent potential though as a college prospect.  He has a long, thin frame that suggests that he is still growing a great deal physically.  Once he grows into his body, he should really see major improvement as a player.  He is fundamentally sound and possesses a good handle of the basketball.  He just needs to get physically much stronger to really see his game progress; that should come with natural maturity but hitting the weight room will help a lot as well.

With continued hard work, on and off the basketball court, Rodriguez should blossom into one of the better prospects in the class next spring (2016).  If he develops as he should, he could develop into a low to mid-major division-I prospect by next summer.

I look for this young man to definitely develop over time, and his best years are well ahead of him.  This is one prospect to keep an eye on for the future.