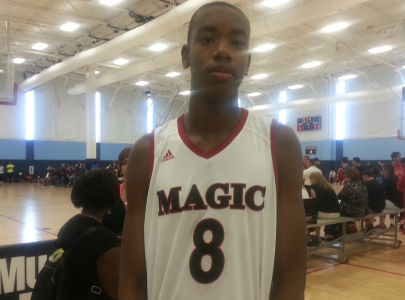 Post players often take a much longer time to develop as college prospects, and as a result, I always have to project where a student-athlete will land over time.  A post talent such as Ondigo projects extremely well, since he has excellent length and is still growing.  His length and athleticism are attractive and his work ethic is as well.  Ondigo has the body and early skillset that suggests that he will only continue to develop a great deal - becoming a solid mid-major plus recruiting target in the future.

Ondigo has not been accustomed to receiving consistent high praise from teammates or competitors this early on in his playing career, so as he continues to mature physically and improves as a prospect, look for him to only relish in the excitement his development creates with basketball enthusiasts, scouts and media.  Once Ondigo begins to really reach his potential over time, watch out, although this potential won't be realized for many years.  Ondigo has tremendous upside - the upside that many college programs look for.

His best attributes currently are his length which allow him to block or alter shots consistently, while also being able to actively rebound outside of his area of the floor.  He has good anticipation and lateral quickness, and is also able to run the floor and finish in transition.

Offensively, Ondigo has a solid jump hook and solid footwork, but is still very raw offensively.  He will need to continue to develop his low post moves and also develop a consistent mid-range jump shot over time.  As he gains a feel for the game offensively, he will reach his maximum potential as a player.  His best asset on the floor is his defensive ability, which allows him to affect games.  His affect on the game will only increase over time as well.

Ondigo has shown very good potential this spring while playing for his club program, the Arizona Magic Elite 16U team.  Look for Ondigo to raise many eyebrows this summer with his play as college coaches catch a glimpse of his exciting potential.