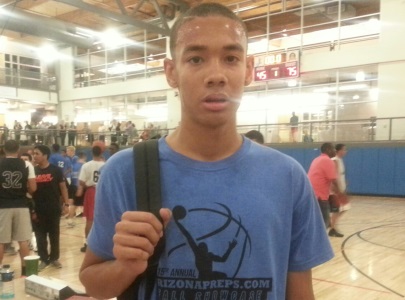 Campo Verde High School is a very young program in the East Valley - only having varsity basketball since 2010.  As a result, the school is not notoriously known for producing much basketball talent for the collegiate ranks.  But look for that to change in the near future with several top-rated young prospects at the program.

The top young prospect in the school's program is 6-foot-6, 195-pound rising junior forward Brandon Whittaker.  One of only two underclassman prospects on head coach Michael Wirth's varsity team last season, Whittaker is a big-time talent for the future and a definite division-I prospect that should blossom to become one of the top overall prospects in Arizona's loaded 2016 class.

Unfortunately for Whittaker, it has taken some time for him to develop as a player.  While playing for his school's varsity team last season, his school's coaching staff was reluctant to give him too much of an opportunity early on his high school career - rather electing to play upperclassmen on the team.  As a result, Whittaker averaged modest numbers during his sophomore season, but will look to explode next high school season as a junior with much more playing time and touches of the basketball.

If this spring was any indication, Whittaker is set to take off as he continues to mature physically.  He is still very young for his grade classification, only being 15 years of age and still nearing 16 years of age.  Currently, Whittaker is a ultra-athletic combo-forward prospect that is still growing a great deal.  Only time will tell whether he develops into a small forward or an athletic 4-man.  Whittaker is still raw offensively and uses his superb athleticism to make plays for himself against bigger defenders, or scores over smaller defenders inside the paint area.  He still needs to develop offensively to become more effective from the perimeter and also more well-rounded overall.  As time progresses, he could really become a superb talent as he posesses excellent upside for the future.

Whittaker is already an active rebounder and shotblocker with excellent athelticism and lift off the floor, which helps him to make up defensive mistakes by himself or others, as he is able to recover quickly.  He still is not disciplined defensively, and has a propensity to get in foul trouble often times.  More focus as a defender will benefit him a great deal over time.

This young man, however, is an excellent finisher, and especially in transition where he is able to run the floor at a high rate and with the quickness of a guard.  His ability to run the lanes up the floor will benefit him over time as he matures and grows physically.

Currently, Whittaker looks to project into a mid-major or mid-major plus prospect, and he could go either direction in his future college recruitment, depending on how much he continues to work on his game and shows dedication to the sport.  The next year will be vital in his future recruitment as a college prospect.

I will be keeping a close eye on this young man's individual development  as a player and a prospect.  Whittaker definitely has the potential to become a serious prospect in an already loaded 2016 class of prospects.