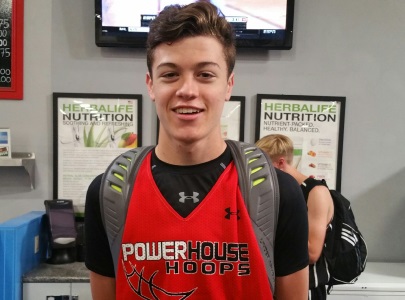 During the month of April, Arizona Preps was on the road in Los Angeles and Las Vegas covering a variety of tournaments and seeing how Arizona’s teams and talent matched up versus some of the other top teams from the West Coast and around the country.

Overall, many Arizona prospects showed very well in these two NCAA Evaluation periods, and I am looking forward to tracking how many of them progress headed into the summer.  Here are more of the top performers that I witnessed over the two weekends (In no particular order) ...

Baker (pictured) is the best shooter of the basketball in the 2018 class in Arizona.  A very long wing who looks to still have some room to grow, Baker knocked down several threes every game I saw him play, and in a variety of different ways.  Baker looks to prefer catch-and-shoot situations, but also hit some big threes off the bounce - creating separation from his defenders.  He is also solid at attacking the basket as well from the wing in transition situations, and has some sneaky athleticism to him.

Talley is one of the top 3 freshmen in the state, and is also one of the better prospects in his class for 2019 on the West Coast.  Talley plays very similar to ex-Kansas Jayhawk Wayne Selden, and has similar attacking and passing instincts.  Talley is at his best when he is able to bully defenders with his “beyond his years” frame off the dribble, and at the basket when he is on the offensive glass. While consistent shooting is still an area of concern, Talley showed improvement from week 1 to week 2, and looked more comfortable shooting the ball.  Defensively, he is a bulldog when he wants to be, and truly backs down from no one - regardless of the situation.

Smith is a player who caught my eye in early April at a local event, due to his length and cool, calm and collected manner on the court. Smith is a long CG who runs the point from time to time, but I think will develop into more of a two, as he gets to shoot the ball more and more.  He has a steady handle, but I feel needs to tighten it up more if he really does want to run the PG position, for the time being.  Smith is pretty athletic and has lots of room for growth.  Look for a big up-and-coming junior season out of him.

Deng may have been the player that impressed me the most this Spring Evaluation Period.  An animal on both ends of the floor, Deng has one of the best motors I have seen in a very long time.  He is extremely athletic, as he finishes all of his fast breaks with huge dunks.  He also possesses very good lift on his jumper, and can hit from nearly anywhere from the 3-point line with efficient accuracy.  He also attacks the basket very strong, and can finish over/around players if necessary.  He gets his hand on a lot of balls that come his way, due to his quick twitch, and he is always aware of where he is on the floor.  Majok is a sure-fire player and look for him to be ranked in the top 100 of players in his class very soon.

Lyons is a high volume shooter of the basketball, and is one of the best shooters in his class.  Every game I saw him compete, he knocked down at least 3-4 threes per game.  While he did make some turnovers in the games I saw him play in, Lyons makes up for it with fire and energy every time on the defensive end of the court, and plays the game to win.  He is also very active on the defensive glass, and got several put-back attempts in the games I watched him play.

Nelson may be the best 8th grader in the state.  A very shifty guard that has a certain calmness about him, Nelson is a very good floor-general at a very young age, and commands presence on the court. He was able to get by numerous defenders on the weekend, due to how elusive he is with the basketball, and once he is in the lane, he can finish at the rack with good body control, or use his vision to dish off to one of his teammates for baskets.  He is also very quick on the defensive end, and is truly not rattled by anything, as the players he was guarding had a very hard time doing what they wanted to on the court.

Simon was one of the tougher guards I saw on the two weekends. Simon did whatever it took on both ends of the floor to get his team the win.  He is good off of the dribble attacking the basket, as well as sitting down on the defensive end, and getting steals and leading the defensive attack for his team. Simon looks to be a winner very early in his career.

Martin was one of the most polished players of the two evaluation periods.  He has a very clean shooting stroke from deep and in, and hit a variety of different types of shots on the two weekends.  He looks very good in transition, as he has a good handle on the ball, as well as athleticism to finish over defenders who are in his way.  He has good defensive fundamentals, and was able to stop players from going where they want - due to his length and pure effort.

Spry is one of the best 2019 prospects in the class.  A pick-and-pop 4-man, Spry was able to stretch defenses out with his ability to constantly knock down jumpers from all over the court from the mid-range level.  He was also very active on the boards, as he looked to get numerous rebounds every game I saw him compete.

Davis has the look of a protypical athletic wing, and proved that was the case with his play.  Davis can shoot the ball with ease from the 3-point line, and also can put the ball on the deck and get to the basket, where he finishes at a good rate.  He was also very active on defense, as I saw him get on the floor on different occasions for loose balls, and attempt to retain position for him and his team. Davis looks to have a lot of upside, as a player and I am excited to see how he does this summer.

Myers is a true floor general for his Alvin Gentry Elite team. Myers has a very high basketball IQ, and looks to make the right play for him and his teammates every time he has the ball in his hands.  He also is a good catch-and-shoot guy, as he is most reliable in that setting.  He has a very solid handle of the basketball, and does not attempt to over dribble or put himself in situations he cannot get out of - a very important quality for a PG.

AZ Power Tucson Red U17’s Cameron Miller of Salpointe Catholic HS in Tucson is a very tough guard.  He hit big shot after big shot the game I saw him compete, and looks to have a huge senior campaign ahead of him.

While I only saw AZ Power-Factory compete in one game before the Spring Evaluation Period, 6-foot-10 2016 C Malik Ondigo and 6-foot-1 2017 CG Dre Marin look to be playing a very high level of basketball.  Ondigo showed serious improvement on both ends of the floor every time I see him play, and Marin is one of the best scoring guards out there, as he rarely misses when he shoots the basketball.

Team Phoenix U17 6-foot-8 PF 2017 Billy Jordan has all the tools to be a big time player.  He has a nice touch down on the block and runs the floor very well for a big man.  If he is able to add some weight to bang down low, he has the ability to be a problem.  He also can step out and shoot the ball a little bit from the short corners as well.

2016 PG Jay Green is one of the best players remaining on the board.  He played a very active and aggressive brand of basketball for Hillcrest Prep, and many schools are inquiring late for his services.  A very athletic PG, Green can knock down the open 3-pointer if left open, and is very tough off of the bounce, as he uses his college-ready frame to bully defenders and do what he wants when he is near the basket.