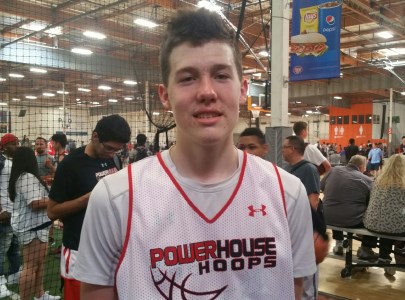 During the month of April, Arizona Preps was on the road in Los Angeles and Las Vegas covering a variety of tournaments and seeing how Arizona’s teams and talent matched up versus some of the other top teams from the West Coast and around the country.

Overall, many Arizona prospects showed very well in these two NCAA Evaluation periods, and I am looking forward to tracking how many of them progress headed into the summer.  Here are the top performers that I witnessed over the two weekends (In no particular order) ...

Dunn had a very good weekend when we were able to see him play in LA.  A big bodied center who knows how to clear space and establish post presence, Dunn has a nice soft touch for a big and can elevate quickly for dunks and scores down low, which is very impressive for his size.  Dunn is capable of hitting the 17-footer and mid-range jumpers as well.  Defensively, he alters many shots due to his length and good defensive awareness.

Rodriguez is one of the better looking prospects in Arizona’s 2017 class.  A long, wired wing, Rodriquez is very athletic from the wing position, as I have seen him finish many transition opportunities with big fast break dunks.  Jared also possesses a very clean shooting stroke from the 3, and can get hot in a hurry from outside if left open.  He is also active on the defensive end, as his long wingspan causes issues for defenders to get around him.

Carter was one of the tougher competitors I saw play during the 2 live periods.  A really heady PG who backs down from no one, Carter attacked the basket at will all weekend, and was able to come up with some huge buckets for his team because of how relentless he was.  He possesses a quick first step and some shiftiness when he is in the lane, which aids him in scoring around defenders in a variety of ways.  He is not the best shooter of the basketball at this stage, but will improve the more he feels comfortable shooting the ball.

Pound for pound, McGlothan might be the best athlete in the 2017 class in Arizona.  With a motor that doesn’t quit, McGlothan is truly at his best when he has the ball in his hands and is able to attack from the perimeter, using his big frame and quick first step to keep defenders on his hip.  He uses his superior athleticism to attack the glass hard for 2nd and 3rd attempt putbacks on the offensive end, and he is usually successful in scoring the ball on one of those attempts.  He can knock down shots from the 3, usually if he is left open, but this is one area that needs a bit of improvement.  If he can consistently knock down shots from 3 and off of the dribble, he has a chance to be one of the better wings on the West Coast in 2017.

Checkett is a “jack of all trades” type of player who can do a little of everything in order to make his team win.  He knocks down 3’s at a pretty good clip, despite not having the best mechanics on his jumper.  He also has a very solid handle on the basketball from the 2-guard position, and is able to break down defenders and get to the basket when necessary.  He also has good vision from the off-guard position, as he was able to account for numerous assists to teammates who were in better positions to score the ball than he was.  He is also very long and has good lateral quickness, which caused the player he was guarding not to score the ball or get many touches in the games I saw him play.  An intriguing prospect who I will watch closely in the month of July.

Kelly has as much upside as any player that I have seen all spring. He is very active on the glass from the wing position, and is able to out rebound many players off his pure length, athleticism, and willingness to make sure he gets his hand on the basketball.  He is also a player with a high IQ, as he knows to post up and take smaller defenders guarding him on the block, which he usually converts at a high rate.  Kelly is also a capable shooter of the ball from outside, but needs to work on being able to play the wing position a little more - a position in which he will need to play at the college level.  He also has very good defensive fundamentals, as he boxes on nearly every position and attempts, or does secure the ball.  Kelly is a player that I came away very impressed with after watching him.

Albright is one of the best shooters of the basketball in Arizona’s young 2019 class.  Albright can fill it up from nearly anywhere on the court from the 3-point line and a little beyond.  Albright is also is an active defender and got his hands on lots of passes, because of being in the right place at the right time.  Albright also can put the ball on the floor a little bit, and had some tough finishes throughout the two weekends.

Lee performed at a very high level in the two live evaluation periods, despite playing with an injured hand.  A lightning quick PG who can score at all three levels, Saben is best when he is able to take his defender off of the dribble in a half court set , where it is rare if any defender can stay in-front of him.  He also finishes at a very high level around the basket, using great body control to avoid charges and strength to finish thru contact.  His jumper from the 3 and mid-range also looks very improved since the high school season.  He is also extremely athletic for his position, as he finishes many fast breaks with huge dunks and tough finishes.  Lee has good vision from the PG spot, as he is able to get into the lane and look to find open players who may have a better chance to score the ball, showing as well that he has a high IQ and is unselfish.  Look for Lee’s stock to rise more and more as the summer evaluation period quickly approaches.

A relatively unknown prospect this high school season, Baumann played himself into being one of the elite shooters in the 2017 class in Arizona.  A long wing who also has some bounce to him, Baumann is really a shooting specialist.  He can hit shots off of the catch-and-shoot situations, dribble pull-ups, or running off of curls and screens.  He also can attack the rim from the wing position, as he is fairly quick and can get by defenders with a long first step, which gets him right to the basket usually.  He is also a tough defender on the perimeter, and gets his hands on many balls in the passing lane.  He will have a huge senior year at Desert Vista and is another player who I will be tracking closely this summer.

Kresl is one of the smoothest guards I have seen in a long time. Kresl possesses a yo-yo like handle where it is very difficult for defenders to get the ball from him.  He has a good burst of speed, which also makes it hard for defenders to stay in-front of him once he gets 1 foot in-front of them.  Kresl is also a very good shooter of the ball from 3, and off the dribble, as he knocked down many different types of shots throughout the different weekends.  A tough kid, Kresl had many steals due to his ability and pure will to do whatever it takes to stop anyone from scoring on him.