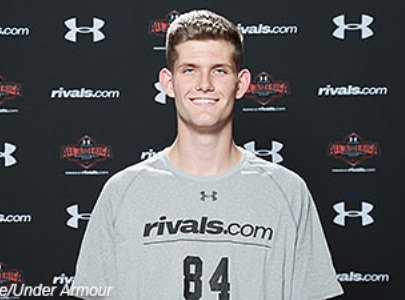 Holding on to our top spot in this position is also our top overall prospect in the class - Gilbert Christian High School's athletic 6-foot-9 senior post Mitch Lightfoot.  Lightfoot is coming off a very good spring and summer performance, where he earned significant high-major division-I interest from around the country.  As a result, Lightfoot decided to take official recruiting visits to five different schools this fall before reaching his decision.

Lightfoot has already taken official recruiting visits now to each of his five schools, and will make his final decision during the fall signing period.  Lightfoot will make his college decision between Arizona, Kansas, Stanford, St. Johns and Utah.

Lightfoot is a very nice talent with broad shoulders and a nice physical frame that should add weight very nicely over time.  He is very athletic for a player his size and has excellent explosion off the ground - allowing him to finish very strong at the rim.  He dunks the basketball very well and plays well above the rim.  Lightfoot also has a mean streak in him, which allows him to raise his game to the level of his competition - a very nice attribute.   Lightfoot is a nice overall prospect with upside for the future.

Checking in at our #2 spot in the position is Williams Field High School's 6-foot-9 senior forward Wyatt Lowell.  Lowell (pictured) helped himself this club season as much as any Arizona prospect, and also proved why he is considered among the elite prospects in Arizona's 2016 class.  Lowell is a long and lean prospect with a nice overall skillset and good overall versatility.

Lowell is a long and skilled wing prospect with a superb shooting stroke – making him an attractive looking prospect.  The cousin and also very similar as a player to former BYU forward Stephen Rogers, Lowell is a talented performer with upside as a player.

Basha High School's gifted and athletic 6-foot-11 senior post Devin Kirby suffered a horrific injury last season during the McClintock Holiday Shootout basketball tournament - causing him to miss much of his junior season, and also all of the spring and summer AAU/club competition.  As a result, he was in a rush to find a college program that would commit to him early in the development process.  Kirby found his fit, giving a verbal commitment to Montana State University and head coach Brian Fish.

Kirby is now fully recovered from a season-ending injury that he encountered last season.  He is looking to have a big senior season for himself, as he recovers physically this year.

One prospect in the class that continues to improve is Dysart High School's 6-foot-10 senior post Malik Ondigo.  While still developing a great deal, Ondigo has developed quickly and has emerged as one of the elite post prospects in the class.  Dysart High School is not known for producing college basketball prospects, but Ondigo's strong development as a player has generated some serious college interest, as numerous schools are now taking notice of him.

After a major recent injury setback for Basha High School's 6-foot-9 senior post Klay Stall, causing him to miss the July evaluation period and his senior high school season, the athletic post prospect  earned some great news for himself when he decided on a future college home for himself - providing himself and his family with a nice verbal commitment to Utah State head coach Tim Duryea and his coaching staff.

Stall is one of the best prospects in Arizona's 2016 class - one of the elite bigs in a center-laden 2016 class in Arizona.  Stall is a typical back-to-the-basket center, as he uses his long frame and solid low-post footwork to score in the low block.  One of the best assets of Stall’s game is his offensive/ defensive rebounding abilities.  He is always in the right place at the right time, and outworks others to get his hand on the basketball.  Stall is an alert passer, as he can see when double-teams are coming, and he will spray out to an open shooter, or dish off to an open cutter.  On the defensive side, Stall’s girth and long wingspan alone detour offensive players from coming into the lane, and he also is an able shot-blocker as he alters or blocks many of the shots that are put up around him.

Stall will now spend his senior season recovering from a severe knee injury, and he should be able to return to form over time.

Five other post prospects that round out our top 10 at this position are each top-rated prospects that could each move up the rankings this high school season with continued strong performances.  Highland HS 6-foot-9 senior post Tim Fuller, Rincon HS 6-foot-11 senior post Brendan Rumel (Portland State commit) and Pinnacle HS 6-foot-9 senior post Nik Mains each had strong performances this summer, and each has benefited a great deal in their college recruitment as a result.

Here are our new Fall Player Rankings for post players in Arizona’s 2016 class.  While we have not seen everyone at the position in the state, these individuals have proven to be the best at the position at this point in time.