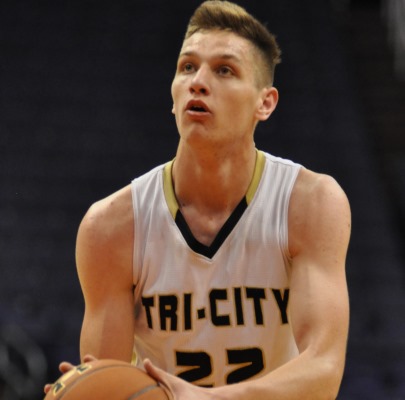 Now that the 2015-2016 high school basketball season has come to an end, it is now time for our staff to make our selections for our Players of the Year, Coaches of the Year and All-State Teams.

Our 2016 Arizona Preps Small School Player of the Year is none other than Tri-City Christian Academy 6-foot-7, 200-pound senior forward Brock Gardner (Liberty University signee).  After a terrific senior season and an illustrious high school career, Gardner saved his best for last this year - leading his team to a big 20-1 overall record this season and a runner-up CAA state title finish.

Gardner was amazing each season at Tri-City Christian, but this season, amidst some serious competition in the league, Gardner exploded for 23.6 points, 11.1 rebounds, 4.8 assists, 2.2 steals and 1.8 blocks per/game.  While his team would come up just short of winning it all this season, Gardner did it all for his team to win every night, and led his team to an undefeated season before falling in the state finals.

Our staff watched Gardner perform on numerous occasions this high school season, and marveled as Gardner turned in the best individual performances we saw all season.  For any doubters out there, it didn't matter who Gardner played against this season, he was unstoppable when he made up his mind to make a play for his team.  He was the best player in the state this high school season - regardless of school, class or grade.

"His consistent production over the last 4 years is unbelievable, especially considering he is #1 on every opponent’s scouting report," said Tri-City Christian assistant coach James Brown.  "There isn’t anything in the game he can’t do well - while consistently delivering in clutch situations and big games his entire career.  The guy has a will to win that is very special."

Tri-City Christian is a K-12 school that was started in 1971.  The school only has a mere 100 students, and was located in Tempe, AZ, until 6 years ago when the school moved to Chandler.   Brock has attended the school since elementary.  His brother graduated from Tri-City in 2011, and went on to play college basketball.  His sister, Macey Gardner, went to Gilbert High School and was the Volleyball HS Player of the Year.  She was also a 3-time All-Pac 12 performer, and is the all-time kills leader in Arizona State volleyball history.

Congratulations to Brock Gardner and the Tri-City Christian coaching staff on this honor from our Arizona Preps' staff.  Special congrats to Brock Gardner on an amazing career and another terrific high school season.  Good luck in the future Brock!