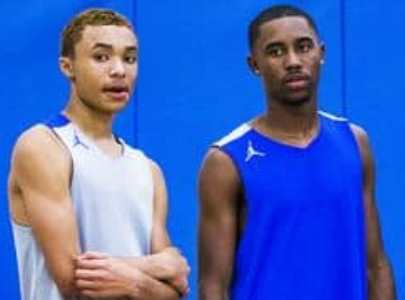 While Basha High School was completely dominant this season, and turned in one of the best seasons ever in the state, Shadow Mountain High School was even better - going undefeated this high school season, and finishing with an undefeated 27-0 record.  Shadow Mountain blew out all of their competition this high school season, on their way to another state title - wining this year's 4A Division State Championship in fine fashion.

Led by head coach Mike Bibby again, Bibby has proven that he has been just as successful as a high school head coach in the state, as he was as a player - completely dominating the state annually.  This season, after losing a lot last season to graduation, Bibby regrouped and led a young team of Matadors to an undefeated season.  Bibby was able to balance a superb trio guard combination of senior Marcus Shaver (Santa Barbara signee) and sophomores Jaelen House and Jovan Blacksher.  This guard combination was absolutely unstoppable this season.  Bibby allowed each of these three guards to shine, while also orchestrating a fast-breaking offense and high-intensity defense that got all of his players involved in the flow.

Shadow Mountain was the best team in the state overall this high school season, regardless of classification.  What is most exciting and hard to believe about this team is that House and Blacksher will come back for two more high school seasons.  Two more consecutive state titles?

Basha High School (31-1) was amazing this high school season, and after fielding numerous teams in the past with much more individual athletic talent, head coach Mike Grothaus put it all together.  Grothaus, a former college coach, finally found a team that bought in to what he was preaching.  Grothaus' excellent coaching job, combined with a very talented group of players, was just too much for the state.

This year's state championship team though was absolutely led by the state's most dominant inside presence this season, 6-foot-5 senior forward Gabe McGlothan (Army signee).  McGlothan figured it out this season, and it was very unfortunate for his opposition.  Rather than try to show what he didn't do well, as he had done last spring and summer, McGlothan simply dominated the paint - rebounding, blocking shots and finishing very strong around the rim.  McGlothan proved this season just how much of a steal he will be for Army next season, while also taking the Basha program to the top of the state with an almost perfect season.

Sunnyslope High School (27-4) amazed Vikings' fans this season by returning back to the state's final game, but this time winning it all.  After reaching the Division-I State Championship last season, only to lose to Mesa HS by a small margin, Sunnyslope dusted themselves off and returned this high school season to win it all - an amazing accomplishment.  Sunnyslope overcame a lot of adversity in the process - overcoming two previous losses to Apollo High School on the season and defeating Apollo in the 5A's state final.

What is most amazing about this Sunnyslope team is that head coach Ray Portela and his Vikings will be back next high school season with everyone returning from this year's state championship group.  I predict a third-straight state championship berth and another state title.

Congratulations also to Fountain Hills HS for winning this year's 3A state title, after playing their best basketball of the season at the right time of the year.  Gilbert Christian also returned to their state champion ways, winning this year's 2A state title in fine fashion and surprising the 2A Division when it counted.  Also, NFL Yet HS made themselves felt in the state's 1A Division - winning the state championship by blowing out all of their competition.  NFL Yet will be a force to be wreckoned with for a long time in this division.

There were also many exciting tournaments held this high school season, with many top performances by players and teams.  No performance though was as exciting as the game between Apollo and Corona Del Sol at this year's VisitMesa.com Basketball Tournament.  In the contest, the combination of four division-I guards took center stage, as Apollo's senior guards Holland "Boo Boo" Woods (Portland State signee) and Dre Marin (Southern Utah signee) went head-to-head with Corona's star senior guard tandem of Alex Barcello (University of Arizona signee) and Saben Lee (Vanderbilt University signee).

Apollo's guards would have the opportunity to make their claim as the best backcourt in the state, but it would come against a Corona tandem that currently held the undeclared title -  as both Corona prospects signed with schools at the high-major division-I level.  Apollo's tandem would come up huge as Holland Woods would explode for a game-high 35 points and 4 assists, while Dre Marin would ignite for 30 points of his own - leading Apollo to a big 92-79 victory.