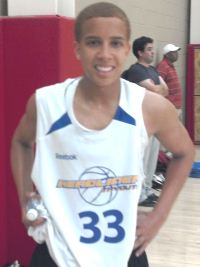 Arizona's 2014 class of prospect is absolutely loaded with talent across the board and at every position.  Another one of the top prospects in the class that you need to know about resides at one of the state's smaller high school programs.

6-foot-1, 175-pound sophomore guard prospect Kris Lamberson of Arizona Lutheran High School is a lesser known name in the class amongst college coaches at this point in his young career, but he is definitely one worthy of your attention.

While playing at a smaller program in the Division-IV Class at Arizona Lutheran HS, many basketball enthusiasts around the state do not get the opportunity to catch a glimpse of Lamberson perform.  This past season, Lamberson helped lead his Coyotes to a strong 25-8 overall record on the season and a big state runner-up finish for this year's Division-IV state championship - falling to state champion Phoenix Country Day HS.

Arizona Lutheran would knock off #1 seed Desert Christian HS in blowout fashion on the way to the state title game, 53-38.

Lamberson came up big this season for head coach and athletic director Doug Meyer, as he ranked second on the team in scoring with 10.7 points per/game.  He also averaged 2.7 assists, 4 rebounds and 1.8 steals.

Lamberson will return next high school season as the team's leading returning scorer and will carry the load for the Coyotes the next two seasons - something he should be able to do quite well as this young man is a nice talent.

Lamberson is a point guard prospect that is capable of playing both guard positions on the floor.  He likes to create for himself and others off the dribble, utilizing his left-handed prowess to create scoring opportuities.  He is difficult to defend as a result of his left handed attack, which allows for him to score effectively in the lane and while attacking the basket.  He uses floaters in the lane and is a good finisher.

Lamberson also has a good shooting stroke, especially from mid-range where he is able to get his shot off against defenders.  He shoots a high percentage from the field and is also a good three-point shooter with range.

Lamberson also has a good overall feel for the game and is a good passer that sees the floor.  He likes to have the basketball in his hands and enjoys making the big play, especially since he has always been his team's top player growing up.

He is also a competitor on the defensive end of the floor and has good lateral quickness, making him a good on-the-ball defender.  Lamberson has the ability to become a much better defender over time, and should really focus on this area of his game to maximize his recruiting potential as a college prospect.

Arizona's 2014 class again is loaded with talent, but this young man is definitely another prospect to keep an eye on for the future, as he has the potential to become one of the state's better prospects in the class.