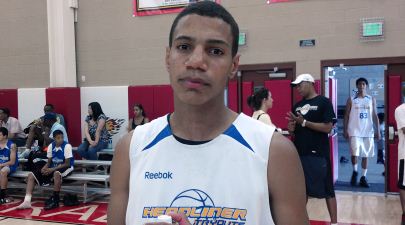 Many tourists travel every year up to northern Arizona to see the Grand Canyon - one of the world's great wonders.  Little did anyone know that high school basketball was being played very near by and at a high level.  Very soon, college coaches will be making the trip as well, but to take a peek at one of the state's top young prospects in the 2014 class.

Grand Canyon High School's 6-foot-5, 190-pound sophomore forward Joey Bankston has quickly developed into one of the state's top young prospects, while still being an almost unknown prospect within the state among local basketball enthusiasts.

A native of Toledo, Ohio, where he lived until recently moving to the state of Arizona, Bankston had very humble beginnings growing up.  While being raised by a single mother, Bankston came from the streets of Ohio as a youngster to develop into the young man he is today.

"I went from the ghetto in Ohio to the Grand Canyon in Arizona," said Bankston.  "My mother has worked really hard to provide for me and gave me a chance to be where I'm at today."

Bankston has worked really hard on his game and in the classroom to become a nice young prospect, that doesn't take life for granted.

"I will continue to work as hard as I can to make my mother, and everyone who has helped me along the way proud," said Bankston.  "I am very thankful."

Bankston is coming off an excellent sophomore season for himself - averaging big numbers as a sophomore.  Bankston pumped in a team-high 14 points, 11.2 rebounds and 1.8 blocks per/game this season , while leading his team to an 18-11 overall record on the season and a strong state playoff run in the state's Division-IV Class.

Grand Canyon HS would advance to the quarterfinals of this year's state playoffs after big wins over Seligman and Pima HS in the state playoffs, and before falling at the hands of #1 seed Desert Christian HS (41-29).

As a result of Bankston's strong play this season, he would receive big post-season honors, as he would be receive a Second-Team All-State selection by the Arizona Republic.

Bankston  is among the state's top young talents, and his athletic talent as a college prospect is glaring.  This young man is among the most athletically gifted young players in the state already, as he has a serious motor and makes plays most his size cannot.  He plays well above the rim when he attacks the basket and has great lift off the floor.  Still developing his perimeter skills to reach his full potential as a player, Bankston is now working very hard on his fundamental approach to the game to increase his ability for the collegiate level - but he still has time.

"Playing against the better players in Arizona, I know what I need to work on," said Bankston.  "I want to play division-I basketball, so I need to keep improving.  I am working hard on my game every day.  "I put up 300 shots today with my coach.  I will get there."

While most college coaches have never traveled to the Grand Canyon to observe basketball talent, that will soon change as this high school prospect is a nice talent and an even better young man.