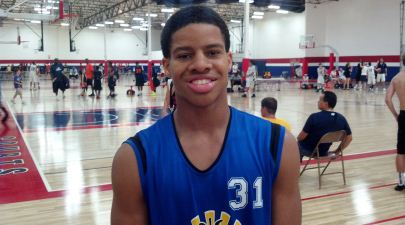 One of the better prospects in the state's 2013 class is Basha High School's 5-foot-11, 175-pound senior point guard Richard Holt.  Holt is coming off a solid junior season for himself where he played in the shadows of many different top-rated prospects last season.

Playing alongside such prospects as 6-foot-5 senior guard Jaron Hopkins, 6-foot-8 senior Torren Jones, 6-foot-10 senior post Maurice Kirby, 6-foot-1 junior guard Nathan Markovich and 6-foot-3 senior guard/forward Kyndahl Holmes, Holt had to get in wherever he fit in - a fact that caused Holt to go almost unnoticed as a college prospect.

Since last season, former head coach Brad Pinter resigned and Hopkins, Jones and Holmes each transferred schools at the conclusion to the high school season.  Hopkins and Jones were rated as the state's top two prospects in Arizona's 2013 class, so their absence will be felt a great deal this up-and-coming season.  Jones transferred to a high school program in the state of Indiana, while Hopkins looks to be headed to Dobson HS.  Holmes made the move to Chandler HS for his senior season.

Returning will be Markovich and Kirby - giving Basha and new head coach John Burns, a former college coach, a solid trio of players to build around.

Holt will be the leader this season from the point guard position for the Bears, as he returns to do his part in keeping this team at the top of the tough Division-I Class.

Last season, Holt averaged 4.6 points, 2.8 rebounds and 3.5 assists per/game.  Holt shot 39% from the field last season and scored in double-figures once last season (10 points) in a 71-69 win over Cesar Chavez HS.  Look for Holt to pick up his numbers a great deal this high school season, as he worked very hard in the off-season and had a good summer performance for himself.

Holt played this summer for his club team, Passion For Ball, where he played for club coach Justin Allen, one of the top young coaches in the state.  The team played very well this spring and summer, and only lost 3 games during the summer months.  Holt was an integral part of the team's success this off-season and he developed nicely as a point guard under Allen's leadership.

The son of former NFL player and University of Arizona football star Richard Holt, this young man is a tough and steady performer at the point guard position.  Holt is a very good defender with very good lateral quickness and a nose for the basketball.  He is able to guard the length of the court and has no problems staying with smaller guards.  He is a floor-general type that enjoys pushing the basketball up the floor and likes to get into the lane and make scoring opportunities for himself and others.  Holt is a solid finisher in traffic, and developed in this area over the off-season while competing against much better competition.  Holt is a solid shooter of the basketball and is at his best from mid-range.  He will need to continue to become more consistent from deep range to give himself more opportunities while scoring off the dribble - keeping the defense honest and forcing defenders to play him close.

Holt is a very good passer with good court vision, and makes players around him better - his best asset as a player.  His strong, athletic build also suits him well, and will allow him to make the transition to the college ranks.

When asked who is currently recruiting him, Holt replied to me that he is unaware at this point in time.

Holt is an excellent student though, and should have no problems becoming a full academic qualifier for college.

Keep an eye out for Holt during the 2012-2013 high school basketball season, as he looks to build on his recent success as a player, and looks to lead his Basha Bears during his final senior season.