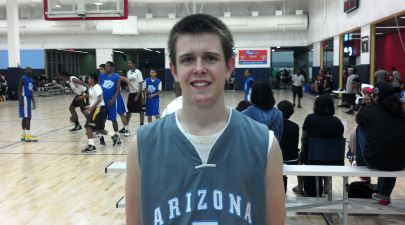 Pitman burst onto the basketball scene last season, while helping his Desert Vista HS basketball program to a strong 2011-2012 season - helping the team to a 22-9 overall record on the season and a strong finish.  Desert Vista under the strong leadership of head coach Dave Williams, would reach the Division-I state semi-finals, before falling to state champion Corona Del Sol HS in the semi-final game, 49-46.

In the Section-III tournament playoffs, in a win over host Chaparral HS, Pitman caught my attention as he knocked down several three-point attempts, and, on one play, stole the basketball, traveled the length of the floor and dunked the basketball with ease - electrifying the crowd in attendance.

Pitman is an athletic guard prospect that is capable of playing either guard position on the floor, but is at his best shooting and scoring the basketball off the dribble.  He is an excellent shooter with range and has deceiving athleticism for his size.  He is a good ball handler and passer, allowing him to play both guard positions, but the shooting guard is his natural position as a player.  He is a good one-on-one defender and has good lateral quickness, capable of guarding quicker guard prospects on the floor.

Pitman simply needs to continue to get stronger physically to handle more mature guard prospects at the collegiate level, so basic maturity will help in this area.  As he matures physically and continues to hit the weights, Pitman should see his game progress a great deal, while also seeing his already good athleticism take off as well.

Pitman's father, Jim Pitman, is Executive Vice President of the NBA's Phoenix Suns.  Jim Pitman oversees all accounting, finance, information systems, and insurance aspects of the organization and is in his 11th season as executive vice president of finance and administration.  As a result, Kyle Pitman has been around the sport of basketball his entire life and has a true love for the game.

Kyle has had a good spring for himself while playing for the Arizona Magic Elite and head coach Kenny Mullins, and will continue to travel with the team this summer to tournaments in Las Vegas and California.  Pitman has grown as a player a great deal this spring while competing against strong national competition, and will look to take his game to another level next high school season at Desert Vista.

Look for Pitman to help lead his Desert Vista program again next season, and help the team to become one of the state's top teams again in the Division-I class.