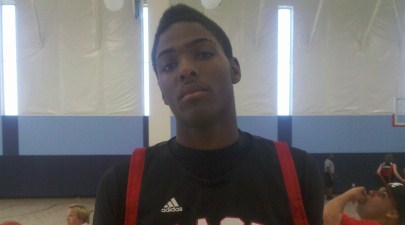 We continue our new Summer Player Rankings with our next release – the 2013 class summer player rankings for power forwards.  This position is loaded with some talented prospects, and has as many division-I prospects at the position as any other positions in the 2013 class.

Leading the way for this summer's rankings at the position, as he has since he entered the high school ranks, is Mesa Dobson High School's 6-foot-8 rising senior transfer Torren Jones.  Once regarded among the top 50 prospects nationally, Jones has seen his national ranking take a hit since entering the high school ranks.  After receiving his first big scholarship offer as a mere freshman prospect from the University of Arizona, Jones has not turned out be as dominant a post prospect as many thought he would become over time.  Instead, he has developed into a solid high-major division-I prospect over time.  While still being very raw offensively, Jones' size, athleticism and high motor have made him a very attractive prospect to college programs throughout the country.

Jones has decided to leave the Basha HS program after a disappointing junior season, in which his team failed to win the Division-I state title and former head coach Brad Pinter resigned.  Jones will pick up his high school career next season at Mesa's Dobson HS where he will play for long-time head coach Rick McConnell.

Jones is now regarded among the top players at his position and in his class once again after a strong spring performance with the California Supreme (CA).  While Jones still has some work in the classroom to get done before being eligible, look for him to garner serious recruiting attention from many high-major division-I college programs.

Coming in at our #2 spot is Chaparral High School's 6-foot-8 rising senior post Joe Boyd.  Boyd gave an early verbal commitment last summer to New Mexico State, but decided to re-open his college recruitment after the early decision was made - just a month later.  Now wide open in his college recruitment once more, Boyd has began to pick up recruiting steam after missing much of the high school season as a junior due to injury.  Boyd is among the state's most skilled post prospects and the best skill player at the power forward position in Arizona's 2013 class.  Look for Boyd to see his recruitment soar this summer, after an appearance at this summer's Reebok Breakout Camp in Philadelphia, PA.

Westwind Prep Academy 6-foot-7 rising senior forward Jonathan Wilson is an intriguing prospect at the position, as he has developed a great deal over the past year.  Wilson is coming off a very good performance for himself this spring, where he showcased his superior athleticism in club competition.  Wilson produced many athletic plays, including two of the best dunks over defenders this spring with his Arizona Magic Elite club program in local club events.  Wilson’s best physical attribute as a college prospect is his athleticism and excellent length, allowing him to finish plays around the basket and play much bigger than his size suggests.  He is still raw offensively, and still developing his ability to score consistently away from the basket.  While it will take his some time still develop his overall fundamental approach to the game, you cannot teach his length, athleticism and willingness to compete.  Wilson has a good motor and still plays all over the floor.  As he continues to develop offensively and learn the game, he will develop into a serious college player.