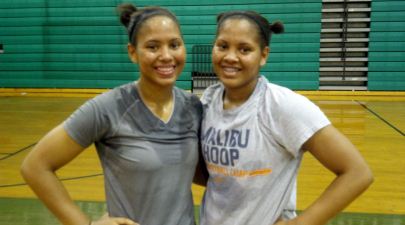 We begin our new Summer Player Rankings for girls basketball in Arizona with our first release – rankings for the 2013 rising senior class.  This class is absolutely loaded with some talented prospects, and has numerous division-I prospects at different positions.

Leading the way for this summer’s rankings in the 2013 class are twin sisters, St. Mary's High School's dynamic 5-foot-9 rising senior duo of Dominque and Danielle Williams.  Both sisters recently shocked the state of Arizona when they gave verbal commitments recently to different high-major programs - splitting up for the collegiate ranks.  Dominique gave a verbal pledge to UCLA, while twin sister Danielle decided on the University of Michigan.  The twin sisters are as talented of guard prospects as there are in the country.  The Williams sisters led their St. Mary's HS program to a perfect 30-0 season this past season, and also a second-straight state championship, but this time in the Division-I Class.  They also helped the Knights to the championship of the Nike Tournament of Champions event in Arizona over the holidays.  As a result of their performances last season, the Knights were awarded a national championship as well.

Checking in at our #3 spot is St. Mary's HS 6-foot-2 rising senior post Chantel Osahor.  Osahor is as talented a post prospect as there is in the state and even the country, as she is big in size but has good hands and is a facilitator for herself and her teammates.  Osahor has a long wingspan and is a very good rebounder, especially on the offensive end where she gains very good inside position and is able to keep the basketball up high for put-back opportunities.  She also is a deadly three-point shooter with excellent range, and also has a variety of low post moves around the basket.  Still uncommitted, Osahor is currently being recruited by many different high-major programs currently and should be reaching a decision soon.

Pinnacle HS 5-foot-10 rising senior guard Sydney Wiese is among the state's most talented prospects and also possesses the state's purest shooting stroke in the class.  Wiese is coming off an excellent junior season and is currently being recruited by numerous high-major programs across the country.

Mesa Mountain View HS 6-foot-2 rising senior forward Jordan Jensen is coming off a recent commitment to Iowa State University after a strong junior season where she led the Toros to a strong season (29-3), before being upset in the Division-I state semi-finals by Hamilton HS.  Jensen is a good-sized forward prospect with excellent work ethic and a nice skill level, which should allow her to transition into a small forward at some point in her college career.

Xavier Prep 6-foot-1 rising senior forward Katie Werner is a very talented prospect that had an excellent junior season as well, and is one of the better sleeper prospects in the state.  Werner put up big numbers in her junior season (18 ppg, 9 rpg) and is one player that could see her ranking improve in our next rankings in the fall.  A gifted prospect with high production that is also being recruited heavily.

Another player that could see a rise in our next rankings as well is Centennial HS 5-foot-11 rising senior forward Kiara Clark.  Clark had a monster junior season, averaging 23 points and 5 rebounds per/game as a junior.  Clark, the daughter of former MLB star baseball player Tony Clark, put up monster numbers last season, including a 38-point effort in a win over Sunrise Mountain and an amazing 42-point effort in a win over Sandra Day O'Connor.  Clark has developed a great deal since I first saw her as a freshman, and continues to impress me with her work ethic and ability to play the game.  A serious sleeper prospect for any division-I program.

Flowing Wells HS 6-foot-2 rising senior post Lyndsay Leiken is fresh off a recent verbal commitment to Ole Miss, after having a strong junior season.  After starting her career at St. Mary's HS, Leiken is the top senior prospect in Tucson, AZ.

Here are our Summer Player Rankings for the girl's 2013 class in Arizona.  While we have not seen everyone among the class in the state, these individuals have proven to be the best at this point in time.