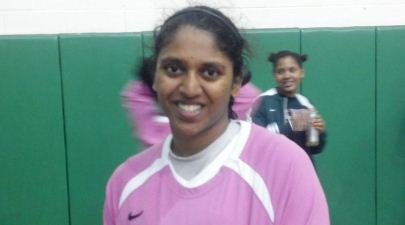 St. Mary's 5-foot-11 senior guard/forward Shilpa Tummala has been selected as the 2012 Arizona Preps Girls Player of the Year.

Tummala is coming off an amazing senior season, where she helped lead her St. Mary's Knights to this year's 2012 Division-I State Championship, after an impressive championship victory over a surging Hamilton HS team - 65-40.  Tummala also helped lead the Knights to the Section-I Tournament Championship.

While these accomplishments by the St. Mary's team were very impressive, none was more impressive than the fact that the Knight were also regarded as the nation's #1 ranked teamall season long - winning this year's national championship as well.  The Knights were a perfect 30-0 on the season and also won this year's prestigious Nike Tournament of Champions event in December.

Tummala came up big in every game this season for the Knights and head coach Curtis Ekmark.  Ekmark, one of the top coaches in Arizona, boys or girls, did not keep statistics on the season for his team.  Instead each player on the team was relied on to give it their all in each game.

"It is nice to receive these accolades, but I couldn't have done it without my teammates," said Tummala.  "They make me a better player on the court."

Tummala was widely recruited by many college programs across the country and reeled in close to 50 division-I scholarship offers going into her senior season.  Tummala has chosen to accept an opportunity to play for Harvard University next fall.

"The season was obviously a success," said Tummala.  "We focused on defense, rebounding, being unselfish, working our hardest, and most importantly, having fun.  It was the perfect way to go out and I'm so thankful for the experience that my coaches and teammates provided for me over my 4 years at St. Mary's."

Tummala's older brother, Sai Tummala, is a member of the University of Michigan basketball program, currently participating in the 2012 NCAA Basketball Tournament.

Congratulations to Shilpa and the Tummala family on this amazing honor and an amazing 2011-2012 high school basketball season.