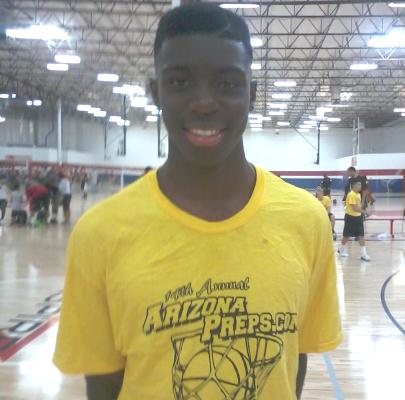 Continuing to lead the way for these rankings at the position is Westwind Prep Academy’s ultra-gifted and athletic 6-foot-8 senior forward Zylan Cheatham. Cheatham is among the top overall prospects in the country and also at his position.
Share
Facebook Twitter LinkedIn WhatsApp Pinterest Email

Once simply known as one of the top developing prospects in Arizona's 2014 class, quickly Westwind Prep Academy 6-foot-8 junior wing prospect Zylan Cheatham has blossomed into as good a prospect as there now is in a very loaded class of prospects.  In a year's time, Cheatham has progressed from a long, rangy and very athletic forward to a now strong and ultra-athletic wing prospect with an excellent skill level - capable of playing numerous positions on the floor, including the point guard position.

While playing this season for Westwind Prep Academy's National High School team on a very loaded roster filled with division-I talent, Cheatham raised his level of play and also improved a great deal while playing against strong competition daily in practice.  Cheatham saw a lot of action at the guard spot with the basketball in his hands, as Westwind head coach Jeff De Laveaga allowed the gifted prospect to showcase his talents - a move that helped Cheatham as a player and also the Westwind Prep team throughout the season.

This week, Cheatham received offers from Purdue University and also the University of Nebraska, as assistant coaches from both programs liked what they saw.  Purdue assistant coach Greg Gary and Nebraska assistant coach Craig Smith both recently watched Cheatham perform while playing for Westwind Prep, and both coaches have extended scholarship offers to the soaring 2014 prospect.

Cheatham has also received serious interest as of late from the University of Arizona, Kentucky, Indiana, Gonzaga, UNLV, Memphis and Miami.

The sky seems to be the limit for Cheatham, as he has quickly risen, in the minds of many basketball scouts, to the top of Arizona’s very loaded 2014 class.  Cheatham’s most impressive attribute is his serious length, athleticism and high skill level.  He has really improved his shooting ability a great deal, but still needs to improve the consistency on his shot from deeper range on the floor.  Cheatham is now handling the basketball like a guard and has shown a great deal of versatility as a player.

Cheatham advised me that he still does not plan to make his decision on a college anytime soon, and would rather take his time in making his decision for college.  His plan is to take his official recruiting visits in the fall and then make his college decision on his birthday, November 17th.

Arizona Hoop Review Scouting Report: I have regarded Cheatham as a future big-time prospect, but he has put it all together much quicker than expected - showcasing his superb athleticism, defensive ability and willingness to make sacrifices for his team to win. Cheatham is a high-energy, ultra-talented prospect with amazing upside as a player, and terrific work ethic. He will only continue to improve as a player a great deal over time, but his value as a lengthy wing prospect is a nice attribute that will have college coaches beating down his door over time. A very good mid-range shooter and player that has developed his shooting stroke a great deal.  Continued work on his jump shot with range will allow him to reach his full offensive potential as a player. Excellent slasher and open court player.  An excellent ball handler and passer with a great feel for the game.  Very few wing prospects can control the game defensively as Cheatham can, and as he continues to improve as a player offensively, watch out. Excellent shotblocker with good timing.  An elite-high major division-I prospect in an already absolutely loaded 2014 class for Arizona.