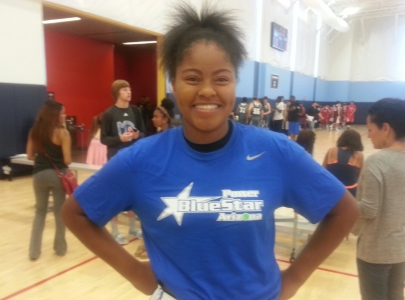 “Speaking on behalf of the committee, we’re excited for the schedule of games this year as the MLK Basketball Classic continues to progress with competitive games involving solid programs.” said Co-Director and Mesa Public School District Athletic Director Dr. Steve Hogen. “With Arizona State University hosting high school games for the 12th Annual event, the MLK Basketball Classic is now a mainstay on the high school athletic calendar in the state of Arizona.  Overall, we’re proud of that accomplishment, as we continue to create educational opportunities for students, involve student organizations, and raise awareness for MLK/Civil Rights Day.”

The game will feature three student-athletes associated with the event host, Arizona State.  Armani Hawkins (Mountain View) and Bryce Perkins (Chandler) have both committed to ASU in women’s basketball & football, respectively.  In addition, Markus Howard, a sophomore guard for Perry, has verbally committed to the men’s basketball program at ASU.

Regarding the schools involved, MaxPreps’ #1 girls’ basketball team in Arizona, Dobson, comes in the event with an 18-1 record and two holiday tournament titles. Pinnacle, which has been to four consecutive state tournament final fours, is the top boys’ team as the Pioneers are ranked #3 in Arizona according to MaxPreps.

The MLK Basketball Classic is regarded as one of the elite holiday basketball events in the country.  Each year, talented boys and girls teams in the state of Arizona compete for bragging rights and school pride during this mid-season showcase.

Perry Impresses In Big Win Over Basha on MLK Holiday