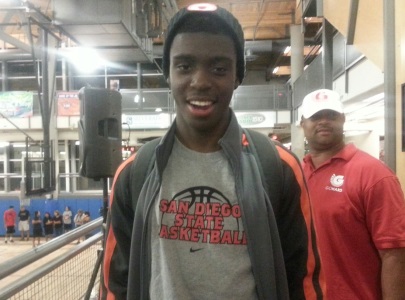 It has finally come to a conclusion for one of the top basketball prospects we have seen in some time.  South Mountain High School graduate and San Diego State signee, 6-foot-8 forward prospect Zylan Cheatham had a very long and tiresome road that forced him to re-take his entire junior year of classes at South Mountain, after having the NCAA declare his classes at Westwind Prep as ineligible for course credit.

In 2013, the NCAA ruled that the classes taken by students at Westwind Prep were not permitted by NCAA standards, so student athletes at the program, such as Cheatham, needed to retake their course work again - causing Cheatham to have to repeat his entire junior year course load during his senior season.

"While other students were going home at 2 or 3PM, I was at school until late in the evening everyday," said Cheatham.  "It was hard but I got it done."

Cheatham took a full load of classes and night school in an attempt to make up school work in preparation for college eligibility.

"In my senior year, I had expected to have it easy, but instead I worked harder than I have ever worked in my life," said Cheatham.

The hard work definitely has paid off for Cheatham, as he finally qualified for college this week, and will leave for San Diego State to begin his college career on Thursday.  Cheatham will not forget the hard work it took to get where he is, or forget where he came from.

Cheatham finished his high school career rated as the #46 prospect overall in America’s 2014 class by ESPN.

Congratulations to Zylan and his family from our staff here at Arizona Preps.  This young man is truely a role model for Arizona's current and future youth in the state.